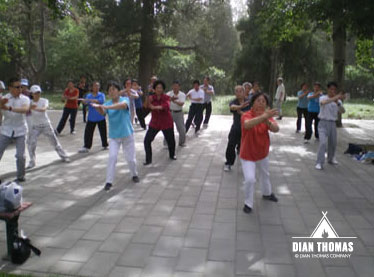 As many of you know I have been on my journey back to health for the past five years as I have lost 110 lbs and put exercise and healthy eating into my life. I am always interested in what people are doing to keep healthy. I knew of Tai Chi (a Chinese exercise) and even took a Tai Chi class. But I wanted to go to China and see it in practice.

The first item of business for me when I got to Beijing was to go straight to the park to watch them do Tai Chi and other forms of exercise. I could hardly wait to see what it was that they did to keep healthy. Our guide took us to the Temple of Heaven. I was blown away. What I saw I wanted to bring home and put in every city in America.

The Temple of Heaven , where many people go, seems to be about the same size as Central Park in New York . What I learned is that there are not hundreds that came to exercise in the morning, but thousands. I was told that 60 thousand people come to the park everyday. 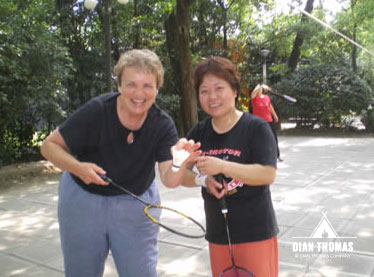 What I found was they love to have you join in with them and do the activities they are doing. In all my travels I have not experienced the warmth and openness of the Chinese people. Even though I do not speak a word of Chinese and most of them do not speak a word of English, we do pretty well with sign language.

One day when I went to the park, I watched several people play badminton and pretty soon one of the players motioned for me to come and play as he gave me a racket. I played with a woman for about 1 ½ hours. I had not played badminton for years and I was a little slow at hitting the birdie. As I got better at keeping the birdie in the air, my partner would say aloud “gooda” gooda”. I knew that I was doing OK. Then they gave me the T signal with their hands and I knew that they were finished for the day. As we gathered around, I thanked them in Chinese. Then they began to point at me and said, “tomorrow? tomorrow?” I soon got the message that they wanted me to come back and play tomorrow. I could not have been more pleased with my experience at the park.

It is one of my desires to both share this experience with others though photo and also by taking them to China to see and to experience the Chinese healthy life style. I can say that in the month that I was in China I did not see five overly overweight people.

At the Temple of Heaven I saw people doing several activities both in large and small groups. One of my favorite groups is the ring toss group. This is a game that they created. They make the rings and then go to the park and find a partner. They stand about 30 to 40 ft apart and toss the rings back and forth. The goal is to catch the rings with you head.

Once the five rings are tossed, the partner in return tosses them back and if you are playing the game you catch them with you head. This is great exercise.

One day after I had played the game with them, they took me and set me up with the special Olympic ring toss photo.

Each time I returned to one of the parks in China I was amazed. One day while entering the park, I found a group that each had a broom handle stick. I could not believe what they could do. I only wish I could go so low and be so limber. 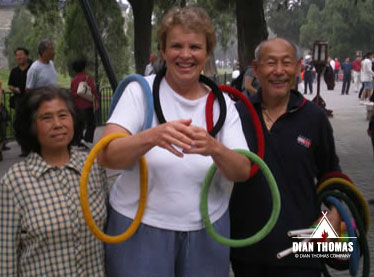 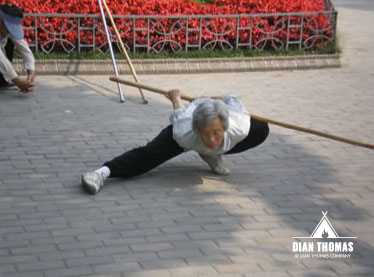 Socializing seems to be a key to why the Chinese go the parks. All of them were working at being healthy while they were enjoying wonderful friendships with friends.

I came across several groups that were singing. The groups ranged from 40 to 6.. Some of them even brought their instrument to play along while they sang.

What I found at the park were thousands of people who were healthy, limber, and having a ball enjoy the great outdoor while they enjoy their friends and exercise their bodies.

I have told many people that I found people in China doing things that I have only seen kids do in the US. 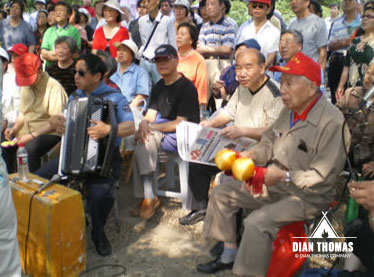 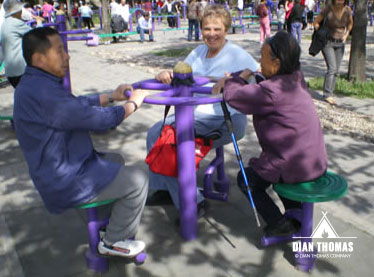 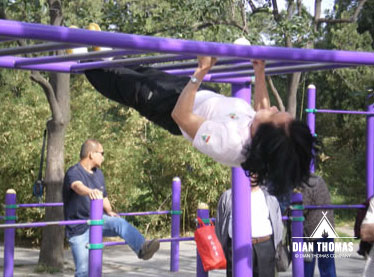 Come join me on a trip to China as we explore the healthy life styles of the Chinese. Then I will have some friend to go to the park and enjoy excise which having fun, socializing and being healthy.