It was eighteen years ago that I first ventured to Africa. I went on several safaris and fell in love with seeing the wild animals in their own environment. When you’re in Africa, it is the people who are in the cages of their vehicles, and the animals are running wild.
As I write this it is March 11, and I am on my way home from another incredible trip to Africa.
A great place to start is in Cape Town, one of the three capital cities of South Africa. (For you trivia buffs, the capitals are Cape Town, Bloemfontein, and Pretoria.)
Cape Town is near the tip of Africa. A quick trip to the top of Table Mountain will
give you a wonderful lookout over the city. 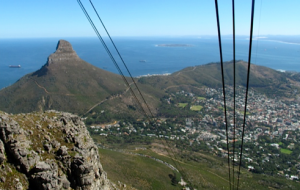 The view from Table Mountain a flat mountain that overlooks Cape
Town.  In the far distance Robben Island is visible.
Just a few miles from Cape Town is Robben Island, where Nelson Mandela spent
27 years in prison before being released in the early 1990s. In 1994, he became
the President of South Africa. Under his great leadership he led this struggling
country to a democratic government. With the death of Mandela this year, the
world lost a great leader. 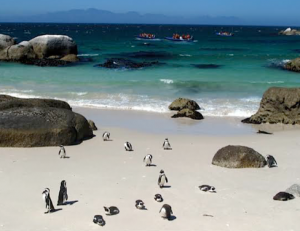 Boulders Beach in Cape Town affords plenty of opportunities to interact with and
photograph penguins in the wild.
After spending a day visiting the highlights of Cape Town we flew to Johannesburg,
which is the largest city in South Africa. Johannesburg claims to be the lightning s
capital of the world, but we only saw blue skies while we were there. 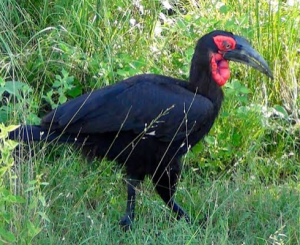 Southern ground hornbill
It was then a day’s journey to Kruger Park to go on three days of safaris. On our way
we visited a beautiful waterfall and enjoyed some of the beautiful flowers that
bloom in the wild. 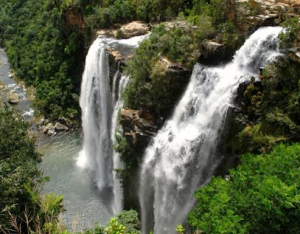 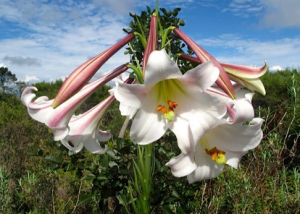 These lilies grow wild in Africa.
One of the sights we saw on safari was a lioness that had been severely wounded in
an encounter with a warthog. A warthog’s tusks can maim or even kill a predator
that we would consider much more dangerous. These wounds may yet prove fatal
to this lioness. Worse, she has three cubs who are not yet self-sufficient and who
will die if she does. 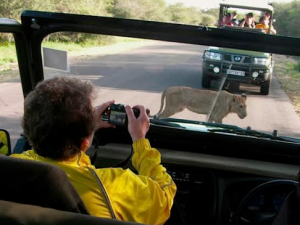 Here I am, taking a picture of a lioness. 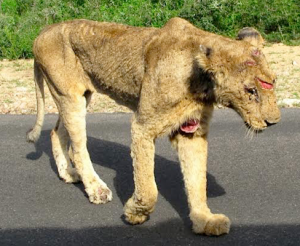 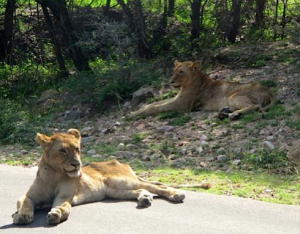 Two of three lion cubs who are in jeopardy if their mother dies of
warthog tusk wounds. 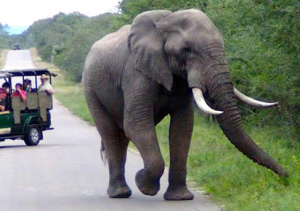 This beauty afforded us plenty of opportunity for photographs.
Our encounter with a large elephant was an interesting one. The elephant got on the
road and would not leave the road and would not let us pass. We finally backed
up for more than an hour. It was an adventure I will never forget. 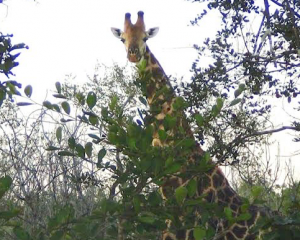 This peaceful giraffe was so unafraid of us that he seemed to
pose forour cameras as he peeked at us over the tops of the trees. 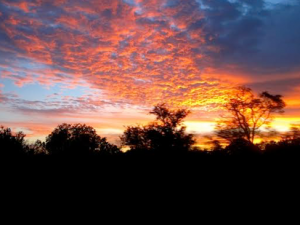