I was blessed to have the opportunity to work on TV in the golden age of Television when there were three main stations, NBC, ABC, and CBS. I wrote a book called Roughing it Easy that was released in 1974. It was March 28 when I went to pick up the first book and held it in my hands and said, “ I wonder if this will change my life.”

Roughing it Easy took me to places I never dreamed that I could go and the opportunities just kept coming. I have had a career of 30 plus years where I could share the love I have of nature, camping in the outdoors, and family fun ideas with millions and I have loved every minute of it.

This weekend I was invited to go to Hollywood to celebrate the 80th birthday of Woody Fraser the executive producer who changed my life. I first met Woody when I was invited to appear on the Mike Douglas Show, which was produced in Philadelphia.

After years of working on the Mike Douglas Show, Woody went on to be the first Executive Producer of Good Morning America. He invited me to do the show many times. I remember how excited I was to ride in a limousine with David Hartman, the host of the show. The whole time we were in the car he asked me questions about Utah and the Mormon Church. 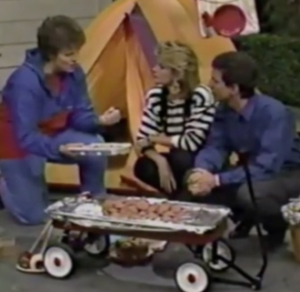 Later Woody went on to create a daytime show for ABC called the Home Show. It became the flagship show for all the home and family shows that followed. I became a regular family member of that show and appeared weekly doing every creative idea that I could imagine.

One day while Woody was riding in his limousine he was reading the Los Angeles Times. There was an article which featured the Word of Wisdom and how it helps Mormons to live a longer life. I got a call from Woody’s assistant asking me if I would find a Mormon who was over 100 years old and be at the ABC Studio the next morning where they would do an interview on the Home show talking about the Word of Wisdom and share with the audience someone that was over 100 years old and had been blessed by their healthy life style.

I called the Church PR department and they found Franklin Richards who was over 100 and still went swimming everyday. The next day we were on ABC’s network sharing the Word of Wisdom with millions. 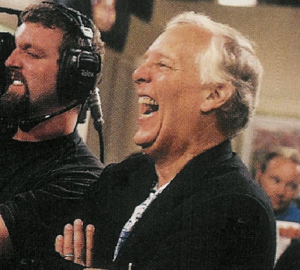 This last Saturday night 200 of us gathered to celebrate a man who changed our lives and influenced millions with his creative ideas and unusual imagination. I often think of that special day I stood at BYU as my book came off the press and think how grateful I am for a man who gave me the opportunity to share my ideas with the world.

To me Woody was the father of my career. What amazing opportunities have come into my life from the door Woody opened so wide for me. Woody at 80 still produces Home and Family, a show on the Hallmark channel on the west coast as well the Huckabee Show, on the east coast which is on Fox News. Happy Birthday Woody!